After our recent third visit to Paris, I have a deeper appreciation for the City of Lights from a new perspective: simplicity. To visit Paris in three days, you must keep it simple. Honoring our son’s 10th birthday wish, our family returned to the famed city, which had so captivated his heart and imagination when we first visited. He was only 3 years old, but his memories were crystal clear, especially his memories of three things: the Eiffel Tower, the parks, and the colorful candy store. 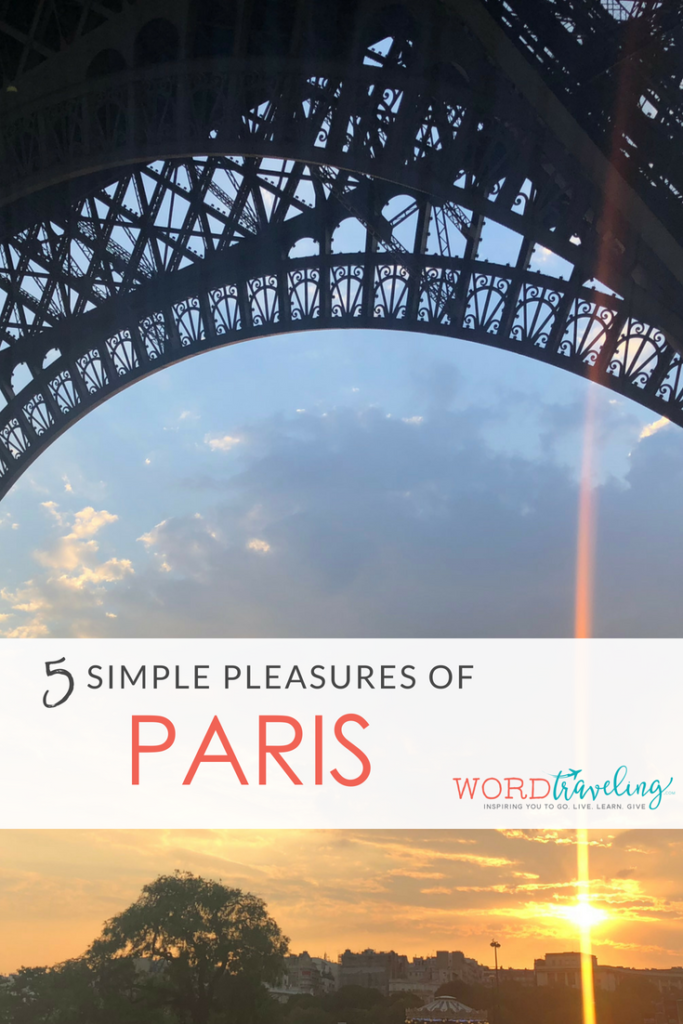 This post is brought to you in partnership with Expedia.com.  All of the opinions and experiences are simply unbiased.

We only had three nights this summer to make the most of Paris with our family. With an overabundance of museums, art, culture, history, dining, and beauty surrounding La Ville-Lumiere, how could we narrow down what to do in Paris in three days? This perplexing question had a simple answer. Focus on simplicity: the simple pleasure of Paris herself.

Where to Stay in Paris

Wherever you stay in Paris, Expedia.com has great rates on every kind of lodging all throughout the arrondissements of Paris.

Want to stay more like a local? Search for an apartment hotel. Be pampered? Yep, there are 5-star luxury lodgings, try Saint-Germain-des-Près or along the Champs–Élysées. Need a pool for the kids to unwind after a busy day? Check. Just make sure to view an arrondissement map, so you know in which district you’ll want to stay, and check out our 5 ways below to enjoy the simple pleasures of Paris.

1. Sit Atop the Eiffel Tower in the Evening

Months in advance, I purchased tickets for our party of six on the tower’s official site to ascend in the elevators to the second story of Tour Eiffel at sunset. (Hint: Do a quick internet search for the sunset time in Paris in advance and book your time slot about an hour earlier.) We were hoping to take the elevators to the summit, but between the cost and nightmares I’d read online about wait times, and the fact that enough tickets for our entire party were sold out, we didn’t get to the summit. Not this time. After all, we only have three days in Paris. 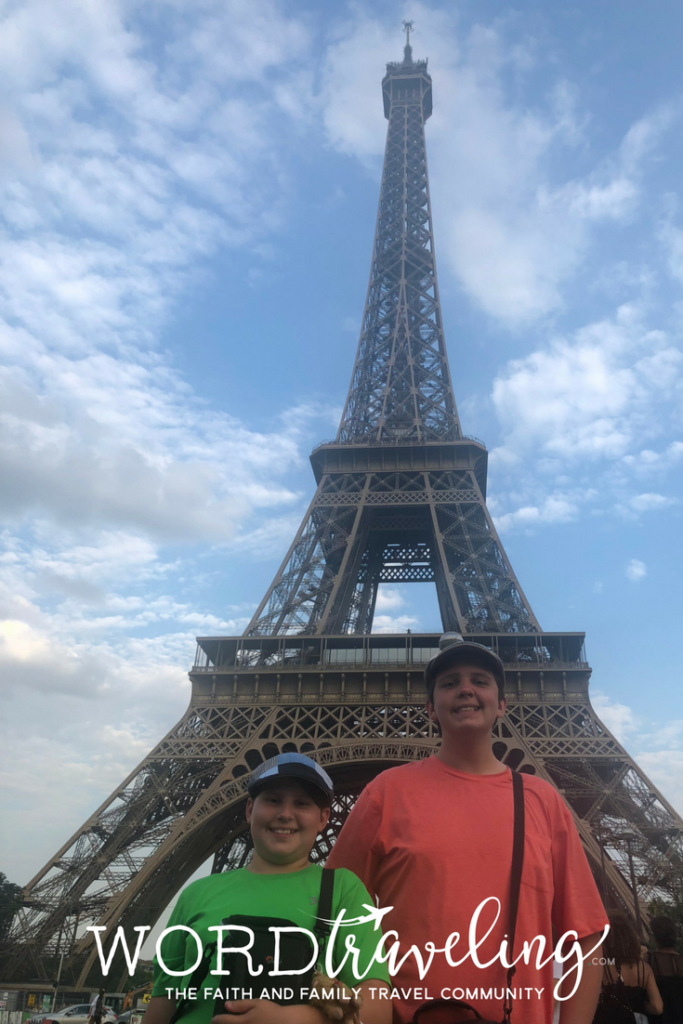 The Eiffel Tower attracts nearly 7 million visitors annually. Originally constructed in just over 2 years (a miraculous feat of engineering for its day), the tower opened in 1889 for the World’s Fair as a commemoration of the 100th anniversary of the French Revolution. The Eiffel Tower, which was initially painted in red, was only supposed to be standing for 20 years. However, due to its scientific help as a radio tower, it remains to this day. Lucky for us. There’s even talk of an original color restoration as the tower will begin its paint job in October 2018.

For a few hours one warm summer evening, we marveled at the views of Paris, faced our fears standing on glass floors, peered through the telescopes (make sure you have Euro coins), and tackled claustrophobia on the elevator ride. The City of Lights, named because Paris was the first city to have gas lighting and was a leader in the Age of Enlightenment, was illuminated in all her grandeur as the sun went down. The twinkling lights on the tower turned on about 10:00 p.m. to the cheering crowd. 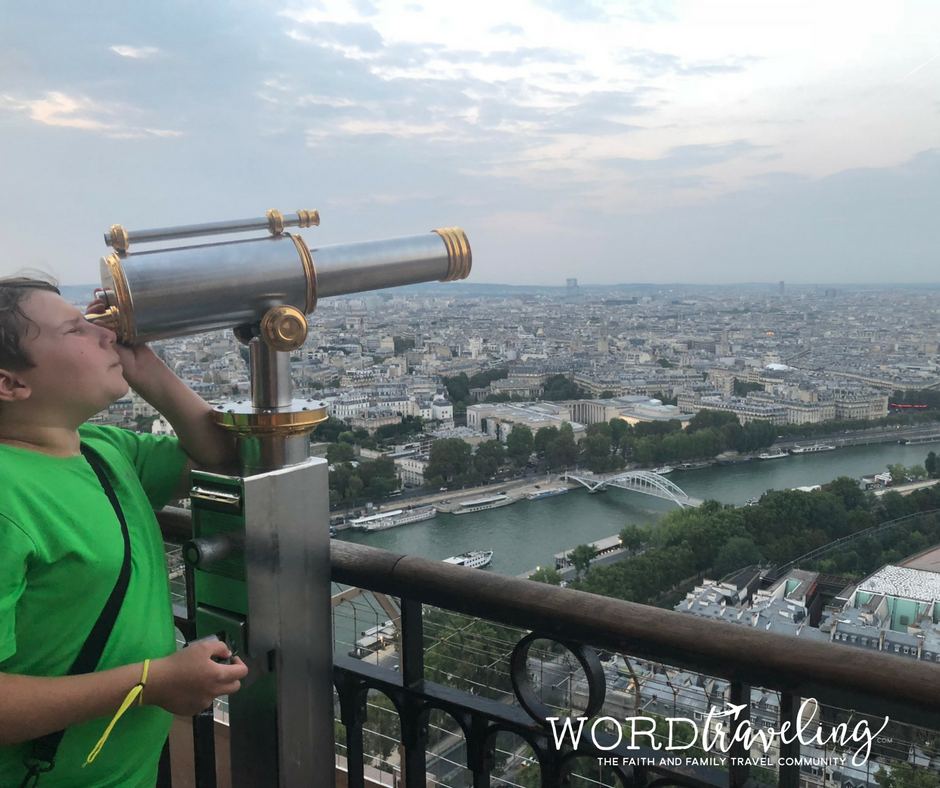 Relaxing among the company of family and friends on the outdoor, second-floor terrace area on the Eiffel Tower was surreal. The ice cream was sweeter. The beer more refreshing. The laughter more alive. The pleasure was simple.

2. Ride on the Upper Level of a Double-Decker Bus

While it may be a very “touristy” thing to ride on a hop-on/hop-off double-decker bus, there’s no simpler way to admire the city’s architecture and planning than from this convenient vantage point. Pop in the provided headphones and audio tour, and you’ll be learning facts, trivia, and history all along the ride. If you choose to ride the Metro between stops in Paris, you’ll be underground and missing the intricately carved doors, stunning rooftop architecture, and bustling city streets lined with cafes. You’ll also be missing the incredible trees. Over 100,000 trees symmetrically line the streets of Paris alone, and the public spaces of the city contain over 484,000 trees. You may even have to duck if you’re sitting along the edge of the bus!

The trees lining the streets of Paris were originally planted in the mid-1800s under the direction of architect Baron Haussmann, who was hired by Napoleon III with the tasks of providing for cleaner air and water for the residents, installing water and sewer lines, and making the city streets more resistant to surprise attacks. Haussmann’s team replaced the network of city walls with tree-lined streets and doubled the size of medieval Paris. If you’ve ever seen an aerial photo of Paris, you’ll see “all roads lead to Paris” and the Arc de Triomphe.

With only three days in Paris, take the bus for two days and have fantastic photo vantage points, hop-on/ off privileges, and short distances from all of the major sights with just enough walking to allow you a real feel for this stunning city. Make sure to take a bit of time and stroll some neighborhoods, arrondissements, like Saint-Germain-des-Près and Montmartre, as well. The arrondissements of Paris are numbered from 1-20 and wrap like a snail shell from the oldest district along the right bank of the Seine. The 1st arrondissement, le premier, the oldest district, which includes the Pont Neuf (Paris’ oldest bridge even though its name translates New Bridge) and part of Paris’ original settlement of fisherman on the Île de la Cité (Island of the City) in the Seine. From the overview of Paris on a bus tour, you’ll drive right over the Pont Neuf, up the Champs-Élysées and through the famed Arc, as well as the gates of the Louvre, the front of the Opera House, and the banks of the Seine. 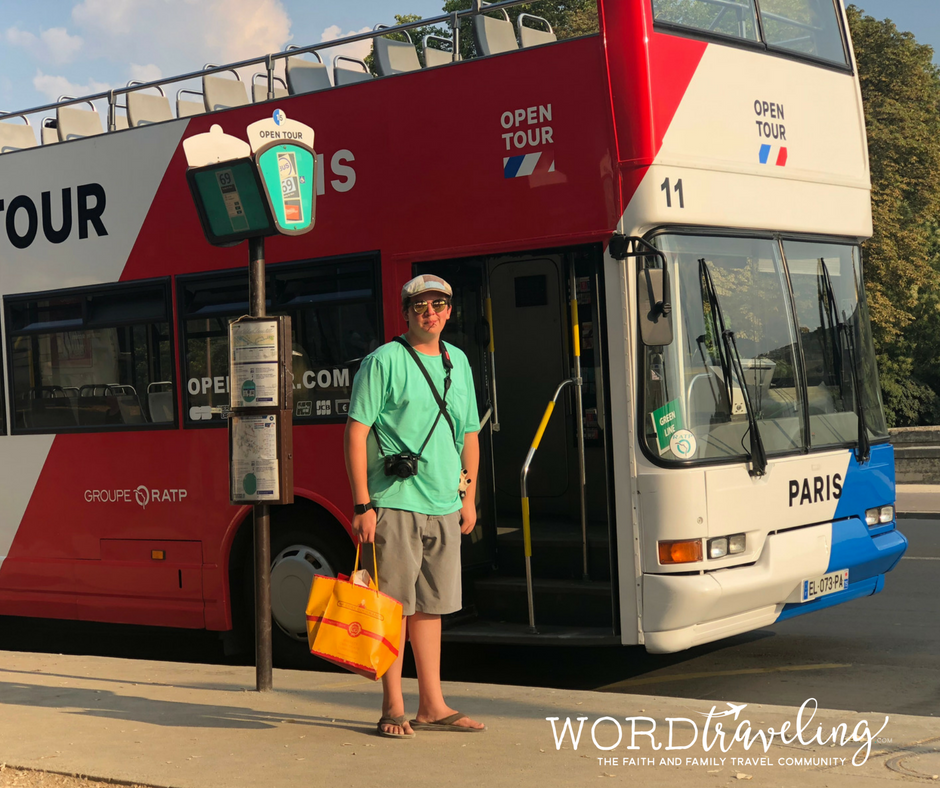 3. Stroll Along the Seine

Hop off the bus near the Notre Dame in the 4th arrondissement, also known as Hôtel-de-Ville, and stroll the banks of the Seine. Stop in the famed cathedral to take a turn toward the right bank and follow the signs to one of the most charming and least crowded parts of Paris, our favorite area, on Île Saint-Louis. As you cross the bridge, you may encounter street performers serenading you, but you won’t encounter many cars. Find your way to La Cure Gourmand confectioner (don’t miss the madeleines!) and the classic French cheese shop right across the street. You’ll love the quaint boutiques, artsy gift shops, and Berthillon, the famed walk-up ice cream parlor. (They have a few locations on the island.) Try the coffee, currant (groseille), lavender, and more unique flavors of sorbets and glaces. 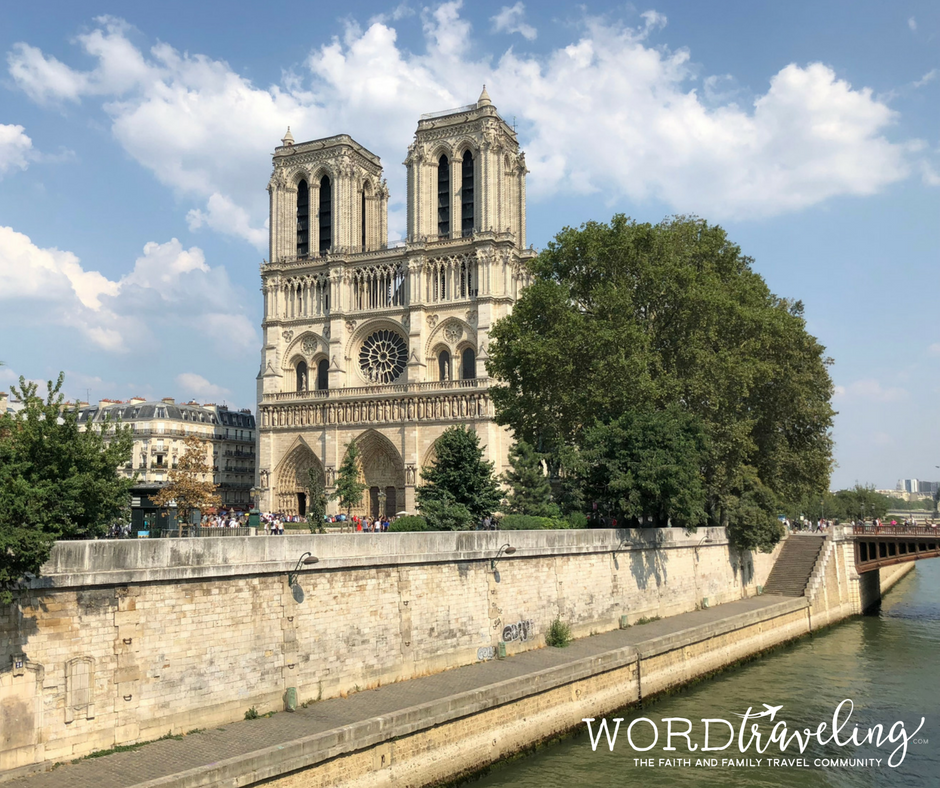 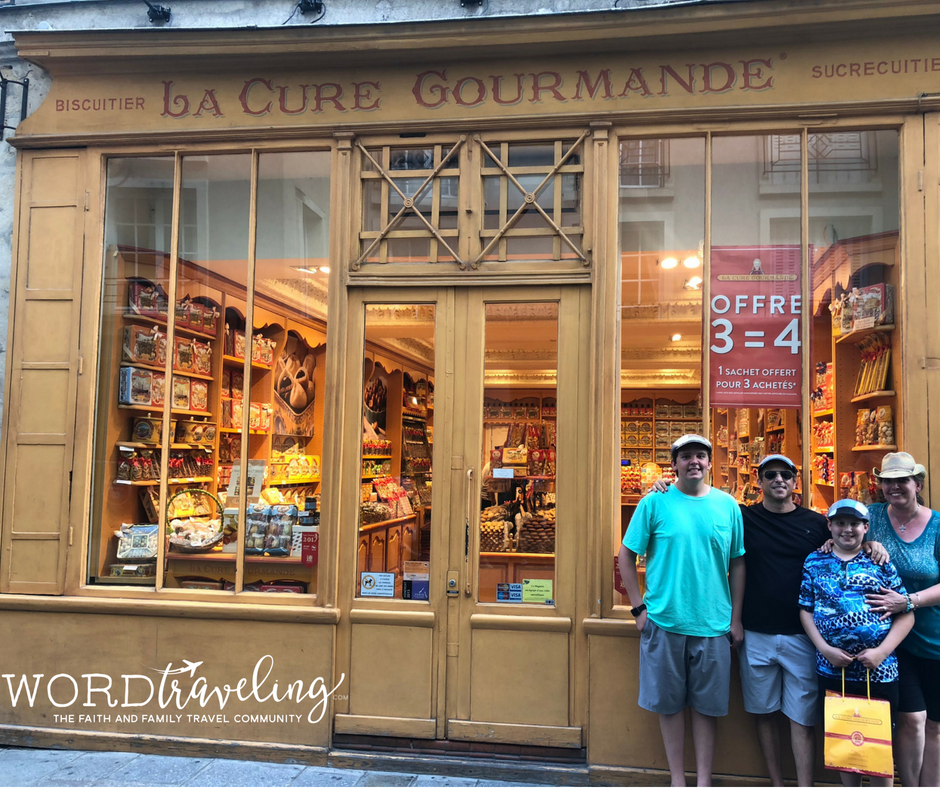 4. Sit on a Park Bench and Enjoy Du Glace

Walk back with your boule (scoop) toward the Notre Dame and enjoy your ice cream and time in Paris in the shade of the sycamore trees at the quaint park. Take a moment to enjoy the old-fashioned bubbler, the unique kids’ play area, the clock tower chiming from the cathedral, and just the atmosphere of all that is Paris. If it’s not this park where you sit, don’t worry, Paris boasts a plethora of parks, gorgeous gardens, and generous green spaces (more than 400!) including the famous Luxembourg Gardens, Parc du Champs-de-Mars by the Eiffel Tower, and the Jardins du Palais Royal. There aren’t more satisfying simple pleasures in life I can think of besides people watching in the parks of Paris with family, especially with a cone from Berthillon. 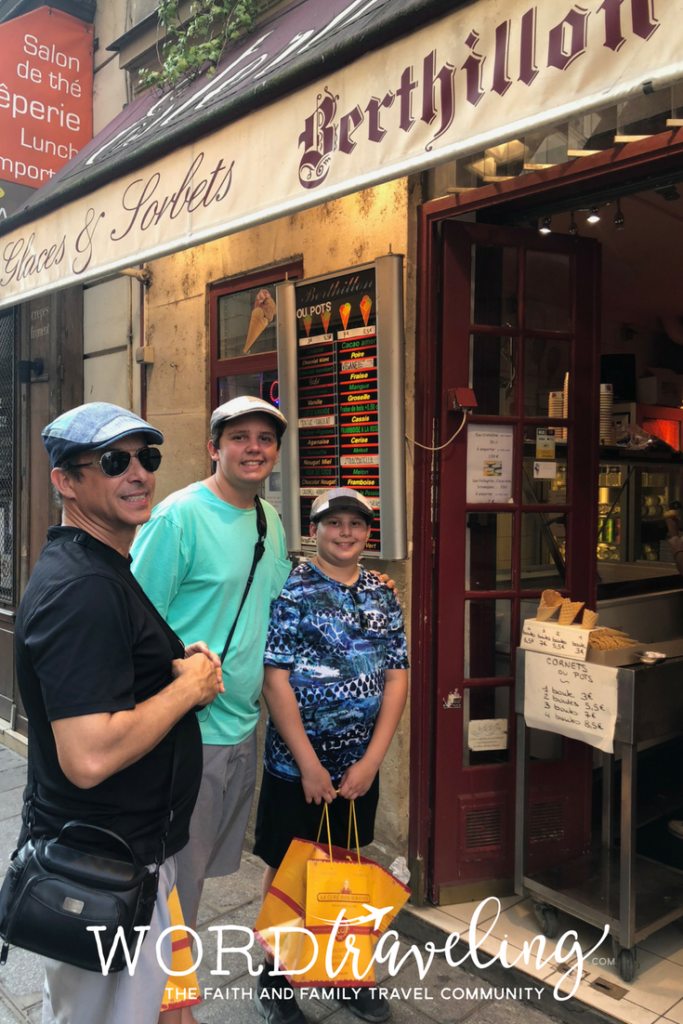 Cross the Seine and the Notre Dame to Place de St. Michel, where you’ll find crowded cobblestone streets lined with souvenir shops, book vendors, quaint, centuries-old eateries, and some of the best creperies in all of Paris. Try a few flavors. My sons love the Nutella and banana while I’m a big fan of chicken and mushrooms. Sweet or savory, any time of the day, there’s sure to be a crepe to please everyone, and for just about €5 each, they’ll please the pocketbook, too. 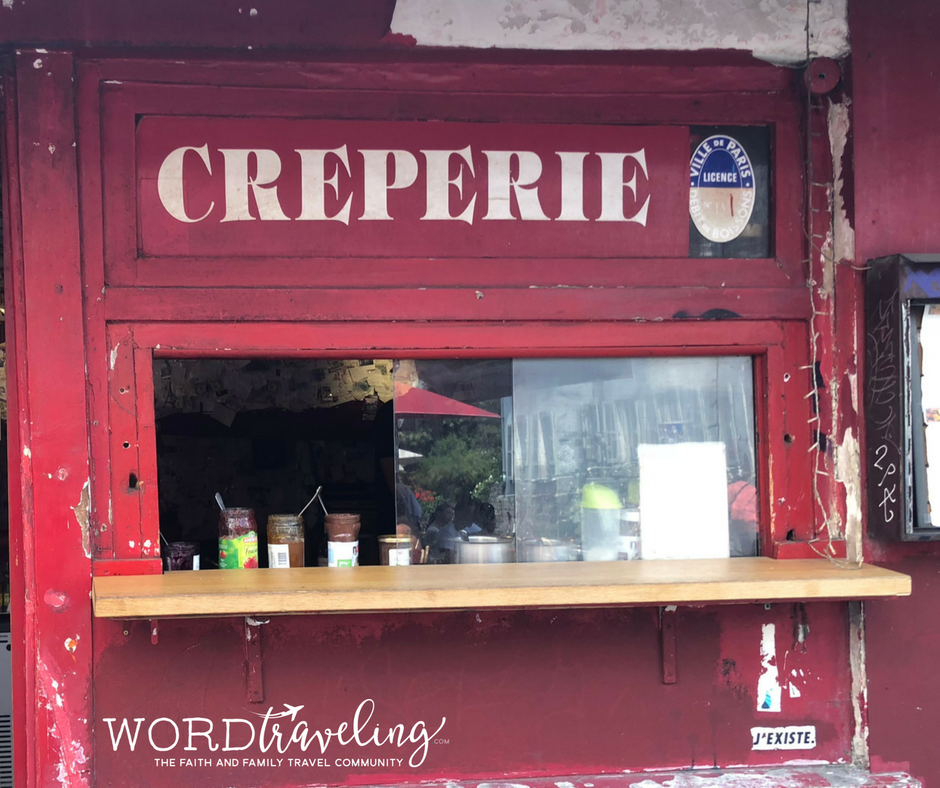 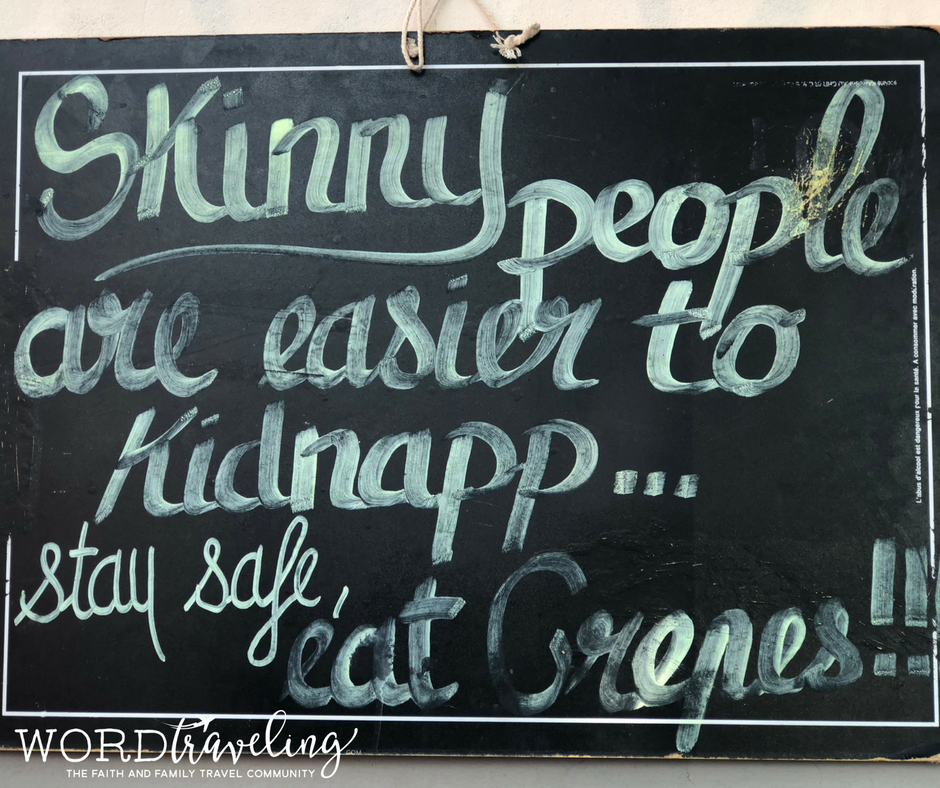 However you enjoy the beautiful City of Lights, you’re sure to be transformed into a lover of all things French. Learn a few phrases, be a kind tourist, and heed my advice on a three-day trip to Paris: leave the rush of getting from one museum and monument to another for another time and just savor the flavors, the sights, and the simple joy of being in Paris.

Au revoir, Paris, until we each see each other again. Parting truly is sweet sorrow. 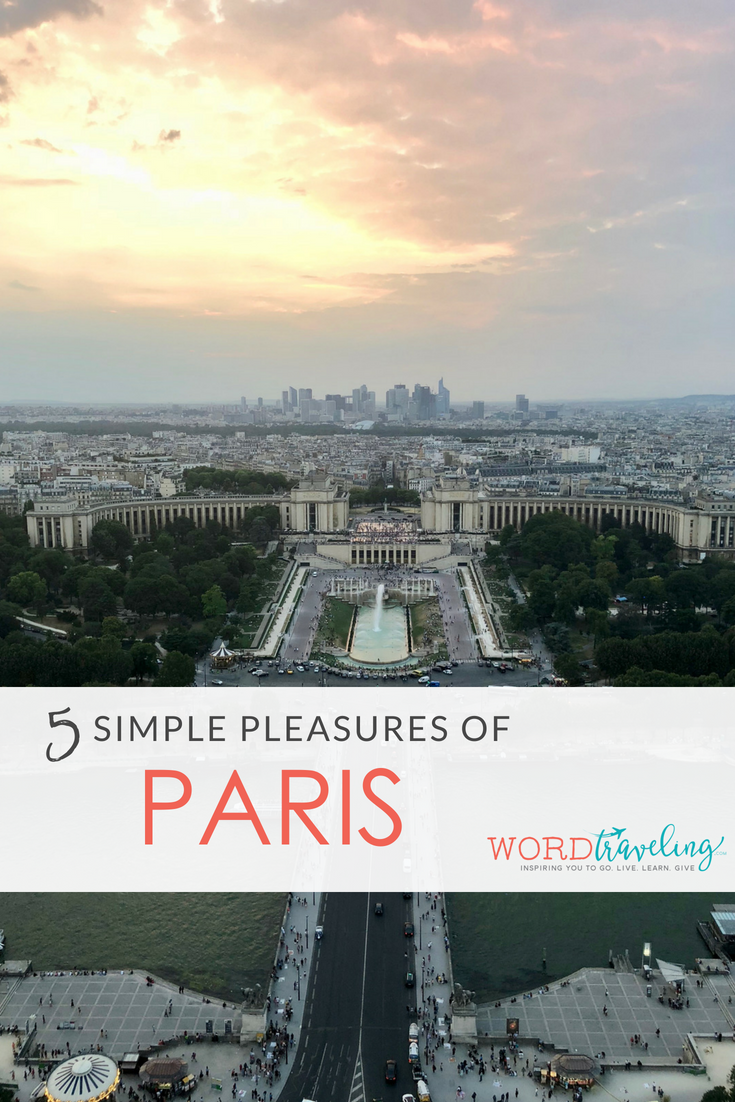