We live in South East Florida, one of the country’s prime spots for sea turtle nesting. For weeks now on my morning walks, I’ve seen their tracks and nests. Once again, the Lord has shown me one of my greatest lessons through the sea. 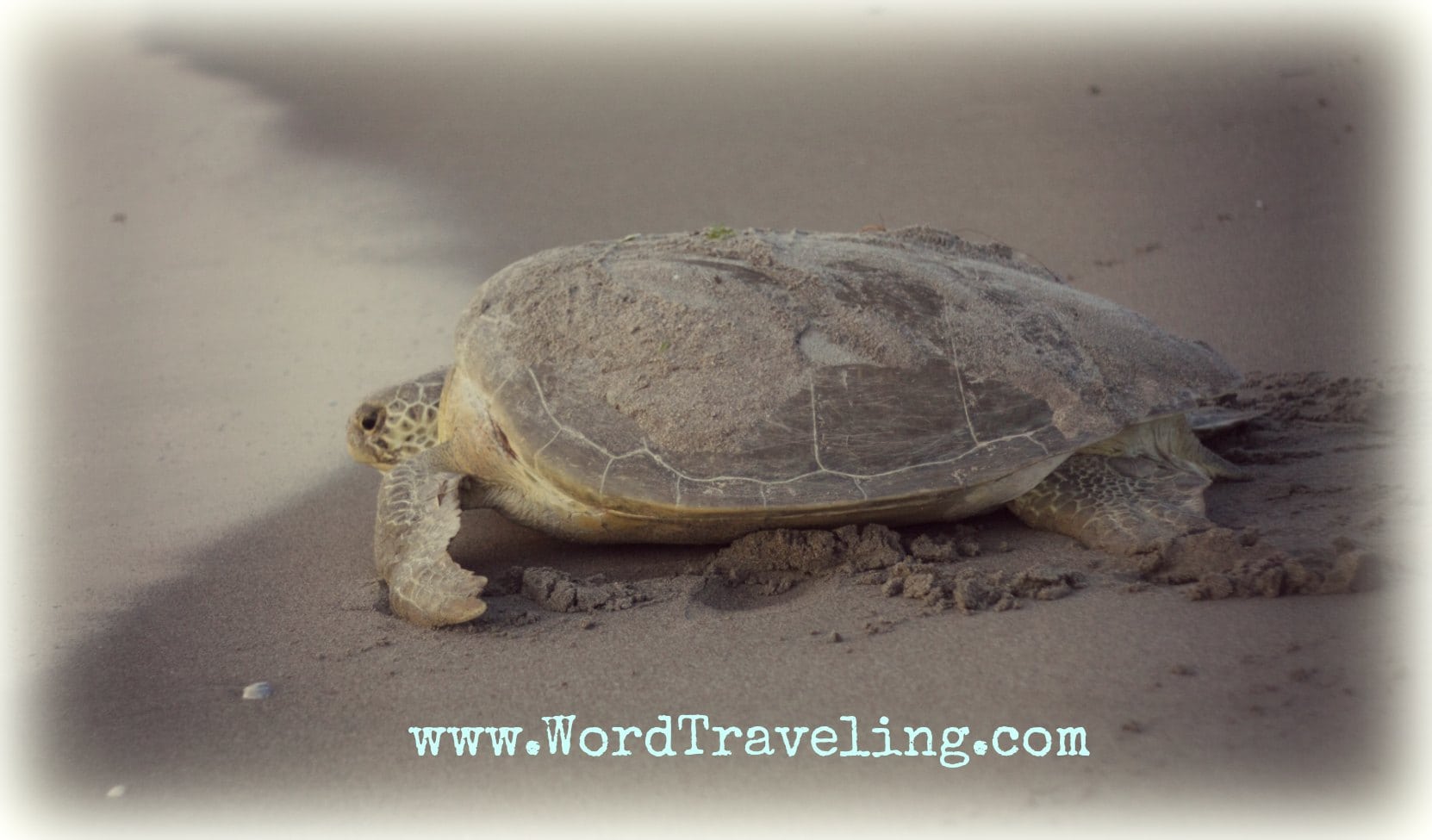 With two small boys and only a handful of night time walks (when they actually nest,) I have yet to see one of these peaceful giants actually nest as I have been hoping. I pray morning and night that the Lord would show one to me, and I remain faithful that in His time, this mother will appear if I was faithful in my beach walks at night with Him. My husband just returned from a business trip, and tonight was a full moon. “Come on, guys! We are going to miss the moonrise!” I pleaded with my boys after dinner. Just as the sun was setting, I packed the baby in his sling and grabbed the red night vision flashlight (to not disrupt the turtles,) blanket, my husband and older son, and we headed across to the seashore.

The air was cool and damp after all day thunderstorms, and the usual brisk ocean breeze was almost non-existent. The sky was still illuminated with that pinkish glow at dusk even though thick clouds filled the horizon. We flopped off our sandals at the usual boardwalk spot and stepped into the cool sand, hard and compact after the heavy rains.

Right away, our older son noticed the water was warmer than the air. He splashed in the waves and I sang songs to the precious eyes of my little blessing wrapped in my sling to get him to sleep. My beloved and I held hands and thanked the Lord for the beach once again.

And there she was.

Approaching in the gently crashing surf, the mama turtle. We were all alone now on this stretch of beach, our family, our Creator, and this creature. Her eyes looked straight at us as she emerged from the waves, not three feet away from our toes in the water’s edge. All of a sudden, our son came running over to us without having seen her, and startled, she swam away. The guys were thankful to have seen her, but me, I wanted to wait around. I knew she wasn’t done with her job. She’d be back. My intuition was right, and just after the boys went home and the sun was down, she reappeared,a big boulder amongst the millions of tiny seashells, illuminated by the light of the full moon peeking through the storm clouds. She saw me sitting down on the cold sand. This time, I froze, and thanked the Lord for sending her. “I won’t hurt you,” I whispered to the mother. “See look, here’s my baby sleeping in my arms.” Her wide eyes glowed as this beautiful lady slipped out of the surf just a few feet from mine, illuminated only by the moon.

I have never seen a creature move more slowly, though. I have witnessed tortoises move slowly across land, and have been privileged to swim along side sea turtles as they fly like eagles under water. But, this is strange and challenging terrain for her. She doesn’t return to the shore where she was born too often, and her enormous size is weighting her down as she sinks into the sand. With each strained reach of her flipper, she barely moves an inch. I watched her move about five feet in three minutes, take a rest from exhaustion, and then do it again. While I watched her struggle to climb up the sand hill into the dunes nearly one hundred feet away at this S-L-O-W pace, I began to think about how we are like this.

We carry weighty burdens with us that slow us down and make it such a challenge to reach our destination.

We have been set free with the blood of Christ! Why must we carry our own burdens when He says to cast our anxiety on his because he cares for us? ENOUGH! Set me free, Abba! What are we waiting for?

“Let me soar like this turtle in her sea and not crawl in the sinking, demanding sand without you!”

Just then, she stopped, turned around and started to crawl back. “On, no!” I thought. “Did I scare her away?”Then, I remembered what Sarah the marine biologist for the Loggerhead Marine Life Center said the other morning while she was cruising the beach at sunrise on her ATV logging the turtle activity. “There must’ve been lots of false crawls last night.” A false crawl. That’s it.I was saddened by the thought of all that effort and work just to walk away.

I was instantly reminded of how many times, in our struggles- just about to succeed and deliver- it becomes easier to lose hope and turn away.

My prayer- for you and for me- is that we deliver the eggs, bury them in the grains of the promises of the Lord, and we wait expectantly for them to hatch.

And that the ones that are meant to make it back to the sea and cause ripples in the ocean of our human race – will.

What have you been carrying around that you need to release? What “eggs” are you praying will hatch? Let me pray and believe along side you. Leave a comment below.