DC is an amazing city.  While I haven’t been to many big cities and just driven through many, it’s been on my bucket list to experience the fullness of life and hustle of our country’s best major metropolis’.  My good friend Jen (the founder of the Word Traveling blog) and I traveled to Washington DC for the press opening of The Museum of the Bible on a Friday.  We were leaving before sunrise on Sunday, which left us only Saturday to explore all of our Nation’s Capitol. We managed to squeeze in most of the major sights, and an encounter with the Secret Service that left us shaking in our seats! Keep reading to see how. 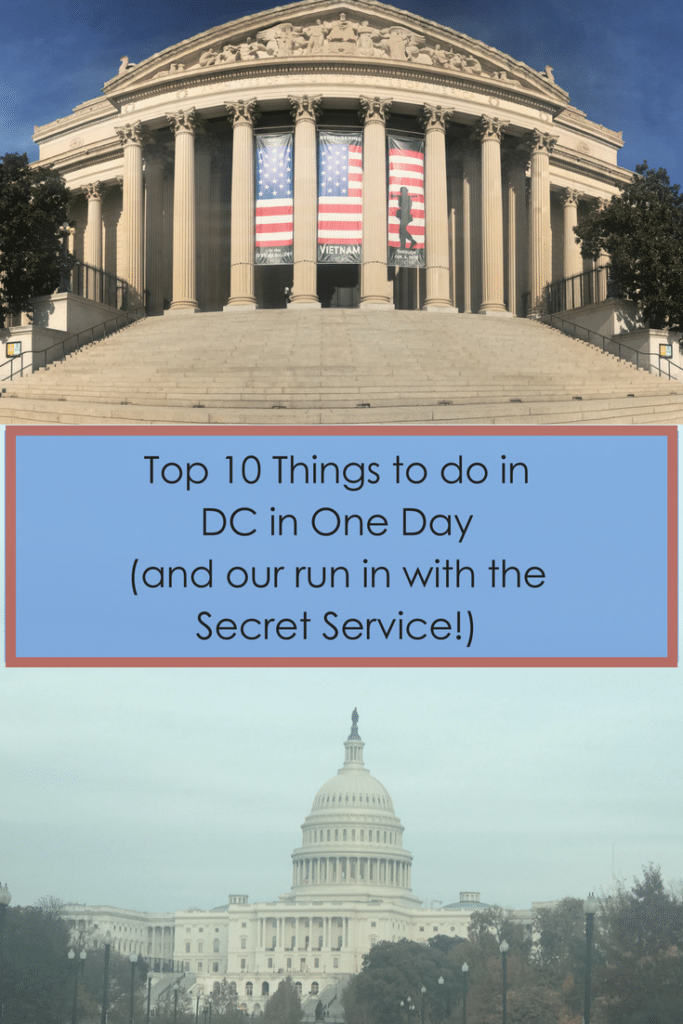 Visiting The National Archives was one of the most impactful parts of our trip to DC.  It contains several of our foundational documents and a wealth of knowledge about our country.  We stopped to see the Declaration of Independence and the Constitution and we learned so much more about them from the super knowledgeable security guards.  For example, the beautiful penmanship of the Declaration of Independence was done by Thomas Jefferson’s clerk in Germanic cursive and we (as a nation) were actually one vote away from having German as our official language!  Leave the cameras stashed away for this visit, and make sure to hit the gift shop. Teachers and homeschool moms, they offer a discount! There was also a moving temporary Vietnam War exhibit.  I’ll admit that my knowledge of the Vietnam war was pretty scarce.  I never knew how much it affected not just our country, but Jen’s dad, a Veteran, and truly the entire world. 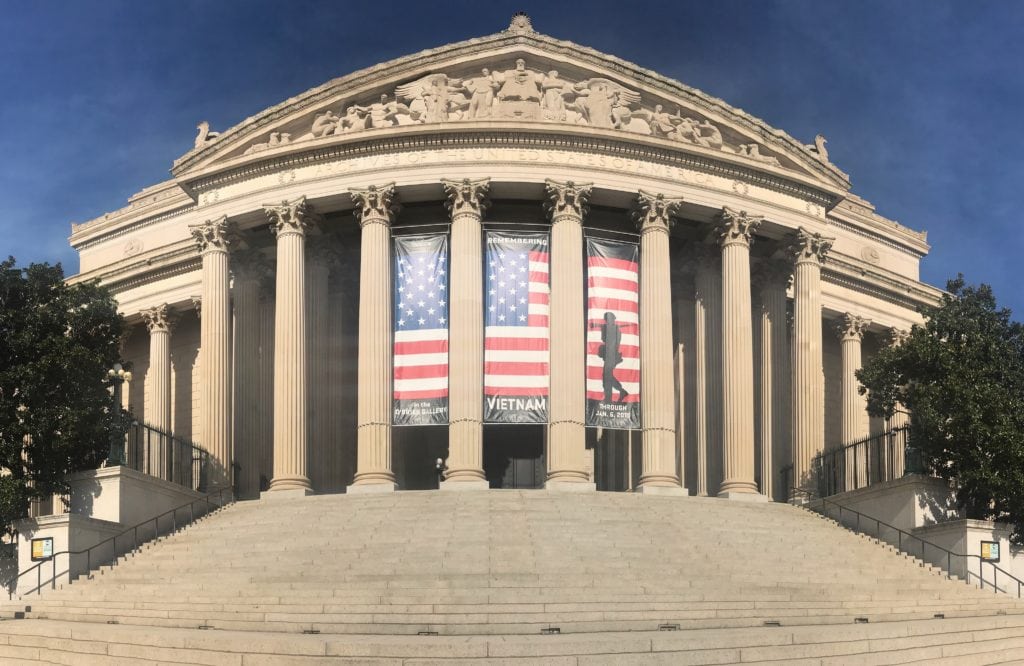 The Washington Monument stands in the center of the National Mall (not for shopping- it’s a planned green space to take a stroll and see the sights!) and is the World’s Tallest Stone Structure.  This 555 foot statue was built to honor the First President of the United States, George Washington, and if you reserve tickets in advance, you can ride to the top.  It was one of my “must sees!” 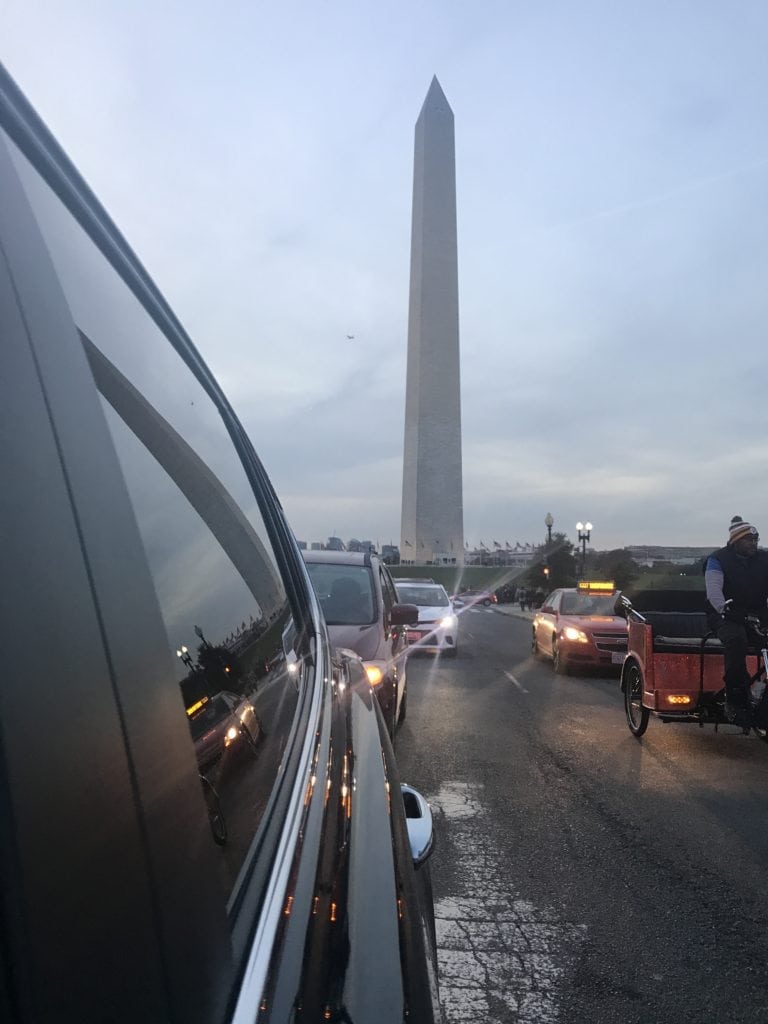 Visible from most places in DC is the Capitol Building.  It is also the meeting place of the legislative branch of the American government. If you reach out to your state representatives in advance, you can schedule a tour. When you get a chance, take some cool shots of The Capitol from wherever you are in DC, and don’t miss the sunset view from the top of the Museum of the Bible. 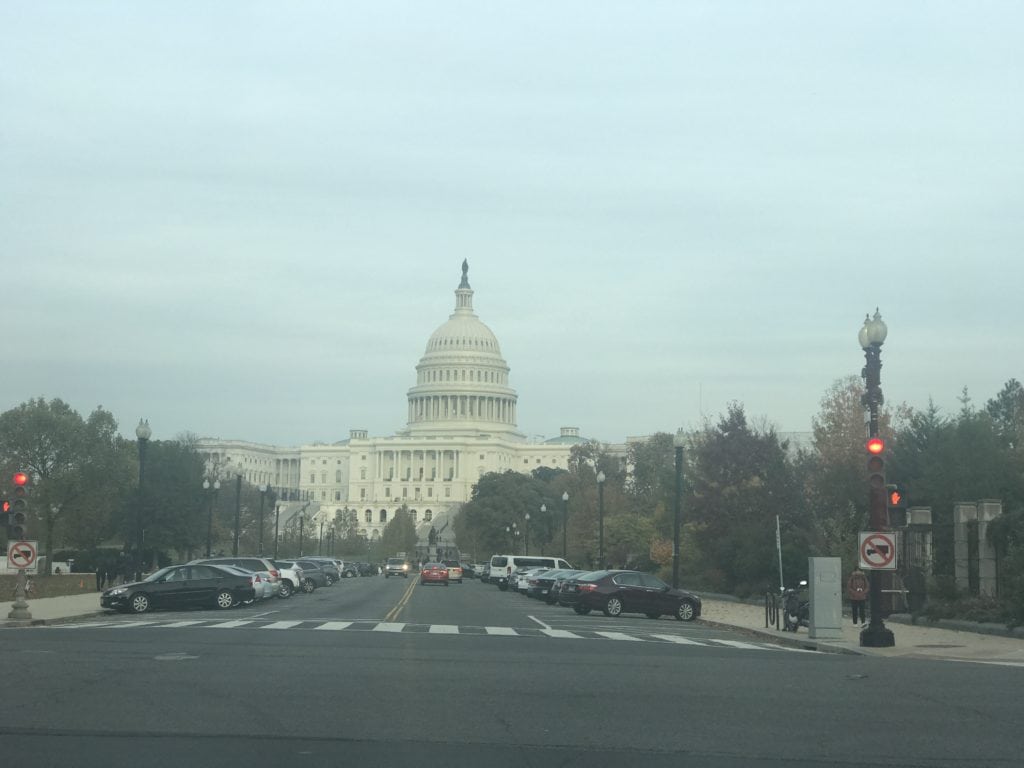 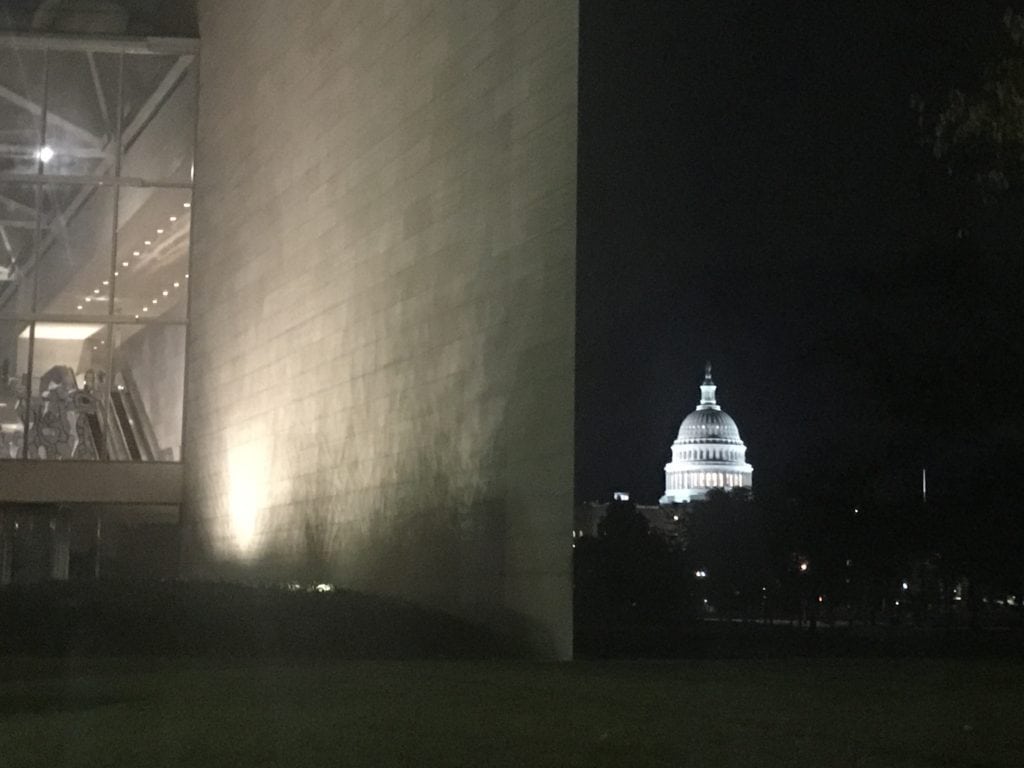 While visiting the Smithsonian, I learned about the several facets of the institution.  In fact, the Smithsonian consists of nineteen museums, art galleries and even a zoo.  For example, there is the Museum of Natural History, which explores science and the natural world of which we inhabit.  There are multiple museums explore different cultures, their history, and their art.

Housed inside the prestigious National Museum of American History is the flag that inspired The National Anthem.  The tattered and worn original star spangled banner, an enormous 30 by 42 foot flag is exhibited in a way that will give you chills. The flag’s “broad strips and bright stars,”  was constructed by Mary Pickersgill, a professional flag maker, and her team of her daughter, two nieces, and an indentured servant.  Over 200 years later, it is still a glorious piece of history to behold. 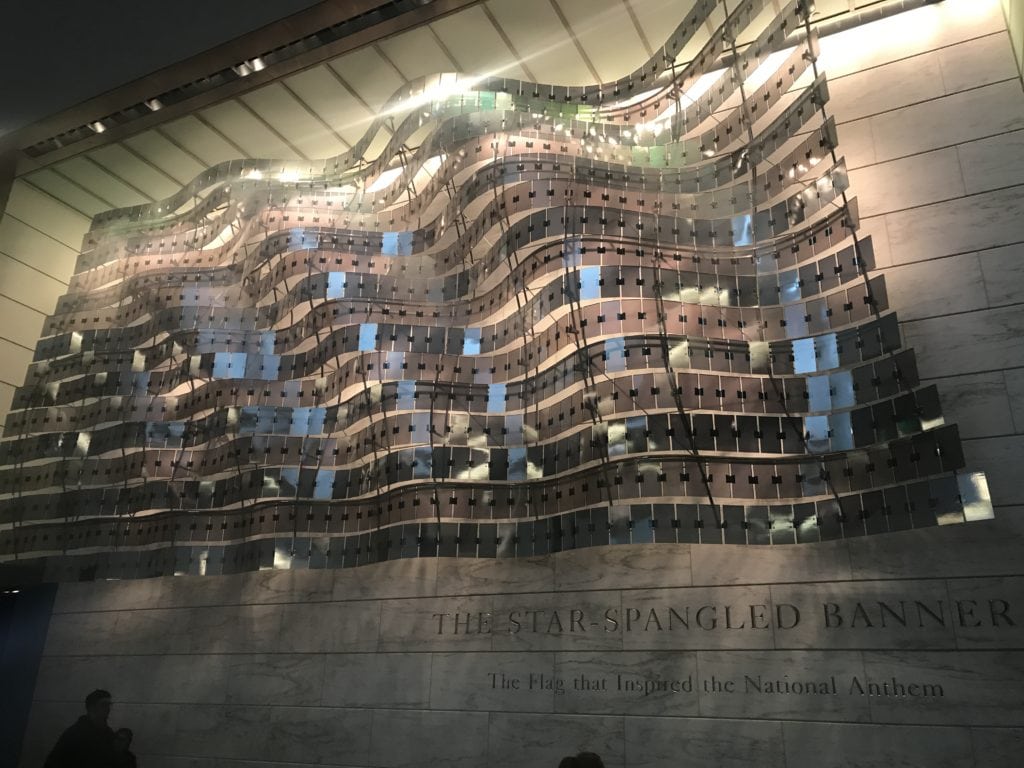 NoMa is a hipster neighborhood in downtown DC, “North of Massachusetts Avenue”  in the process of reinventing itself. Filled with deco buildings and funky murals, NoMa is also the home of several historic landmarks, crazy cool events and the Hilton Garden Inn where we stayed. You’ll need a car to navigate some of the tricky streets.

Disclaimer: we were loaned a Rav 4 for our girls’ trip to DC in order to explore the area but all opinions are unbiased. 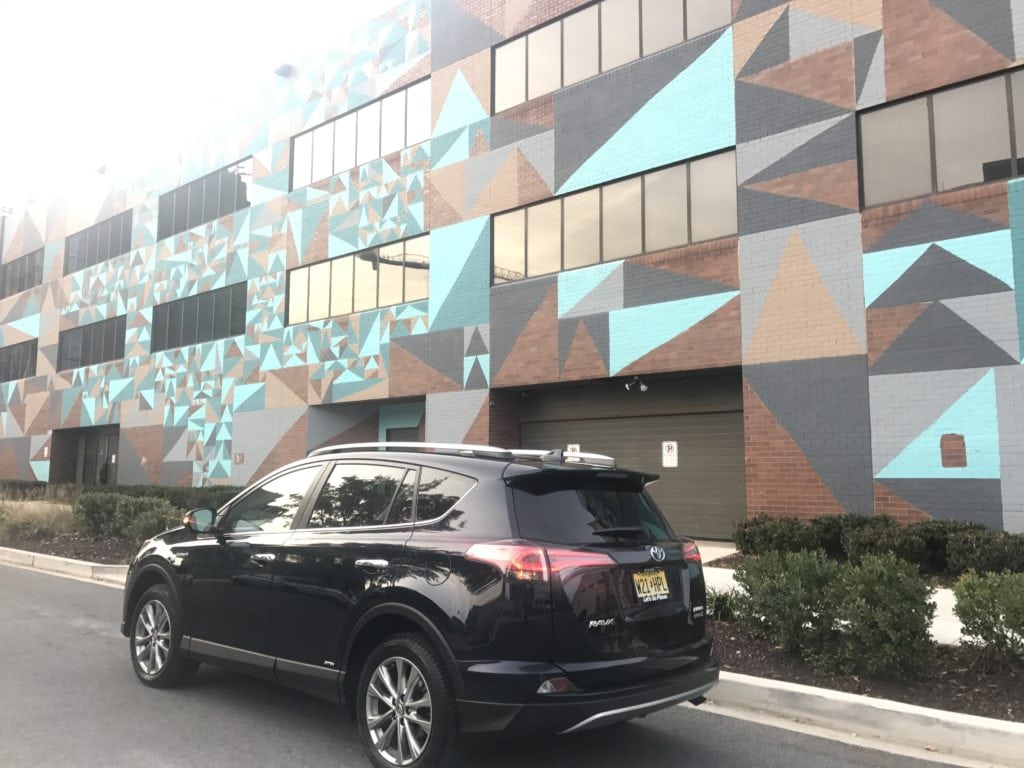 We traveled the crazy streets of DC after flying into Baltimore. Because we had use of the sweet Rav 4, we were able to cross the Potomac River into Alexandria to catch an awesome sunset view of the Jefferson Memorial, and a coffee with friends in Virginia. Don’t know what we would’ve done without the built in GPS- the navigation was the easiest I’ve ever used. Have you ever driven the streets of DC? I mean, where else so the streets have intersections within their intersections?  It is insanity! No wonder most locals don’t own cars!

Hint for driving in DC- leave the car parked with your hotel and use Uber, Lyft, the Metro and your feet to walk! Then, grab the car with the heated seats to drive the outskirts! 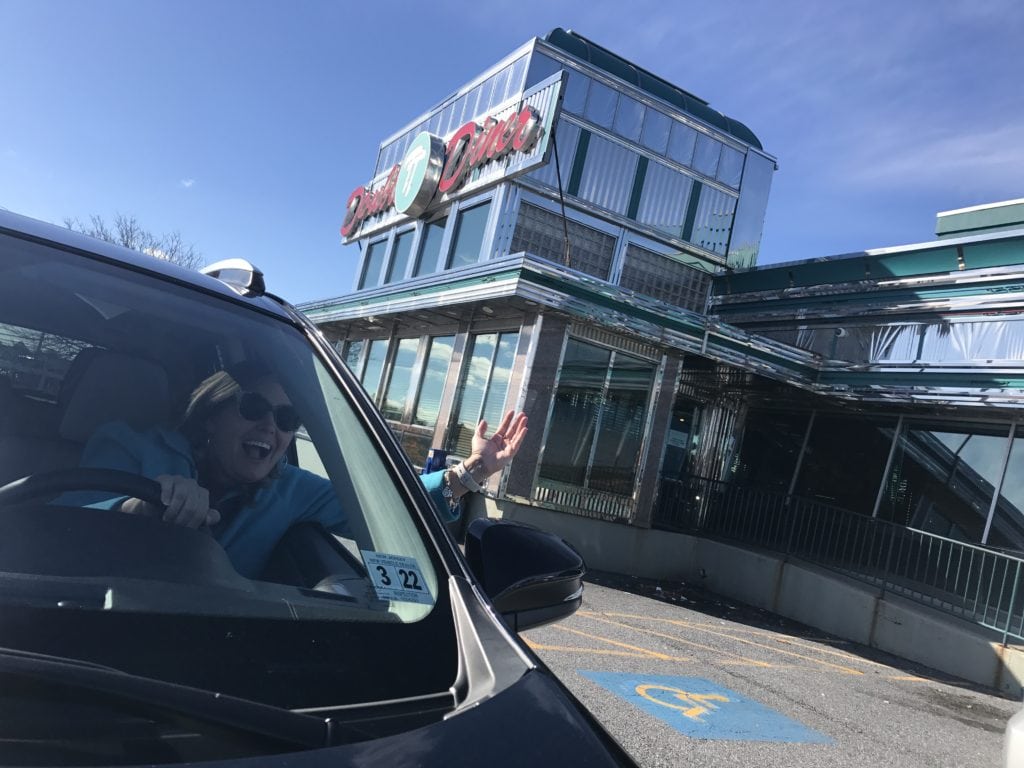 Jen got to meet her cousin and I got to meet up with my aunt and uncle in Baltimore.  If you rent a car in DC (try the Toyota Rav 4), you can also check out the quintessential diners and the #BaritoneBaristas of Baltimore at the Starbucks in Catonsville.

If you need some Christmas cheer and coffee this holiday season, check out the Baritone baristas of Baltimore. As they prepared coffee, they also performed carols. What is your favorite coffee drink? I taught my son to make make a peppermint mocha while I recover after surgery. #wordtraveling #merrychristmas #christmas2017 #christmascheer #starbucks #baritonebaristasofbaltimore #coffee #christmascarols #peppermintmocha #jesusisthereasonfortheseason #jesusisacoffeelover #doubletdiner #baltimore #letsgoplaces #ad

The Treasury Building is where all US paper currency and coins in circulation are printed and minted.  There are several wings and suites and with proper planning, tours can be arranged.  I do not suggest stopping the car in a loading zone, putting on flashers, and taking pictures from outside of the building, especially along Pennsylvania Avenue!  While Jen was taking a picture with her iPhone of the Treasury building where her uncle used to work, a man dressed in black from ski mask to bulletproof vest with “Secret Service” embroidered in white on his black turtleneck charged the vehicle and demanded that we, “GET IN THE CAR, MOVE THE CAR!” With adrenaline pumping, Jen popped back in the driver’s seat and hurried away, all the while shaking! Even though we didn’t think we’d done anything wrong, he was WAY too close for comfort!  It was the scariest, yet most memorable, experience of my life! Later that evening, we laughed as we realized we were parked at the back entrance to the White House! OOPS!

8.) The Museum of the Bible

Downtown DC’s newest high tech museum, Museum of the Bible, is dedicated to making the best selling book of all time approachable to everyone.  It was so amazing that even entering the lobby was a world class experience.  There were so many different exhibits and experiences, it’s worth more than a full day’s visit.  My personal favorite was the Old Testament experience.  The combination of the video, tech, sound and lights made these ancient stories come alive.  This museum really makes the Bible more interactive and not just a book for one specific faith, sharing.  its expansive impact on history as well as it’s far-reaching impact on our world today. 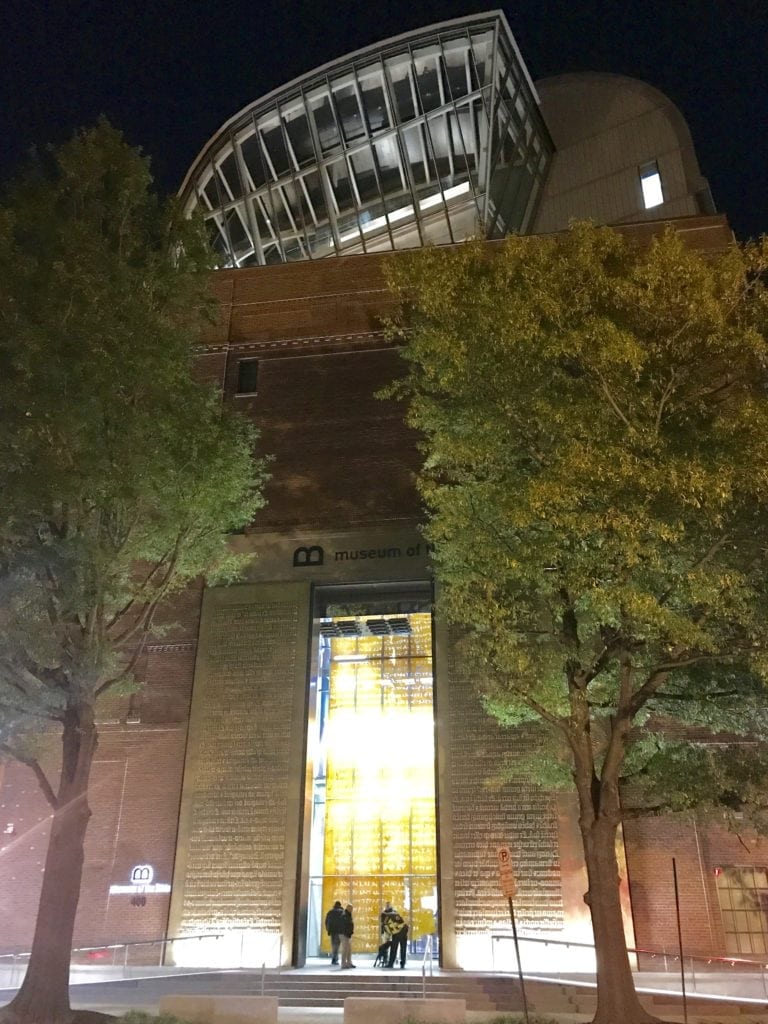 Something that I found very interesting about DC was how everything stopped around 10 pm.  There weren’t really any places grab a bite late at night, except ChinaTown. I have never seen ChinaTown and I also thought that there was only one in the country. After exploring DC’s, I can’t wait to experience more China Town’s all across the nation! It was such a cool place, and you can’t go wrong with food anywhere. 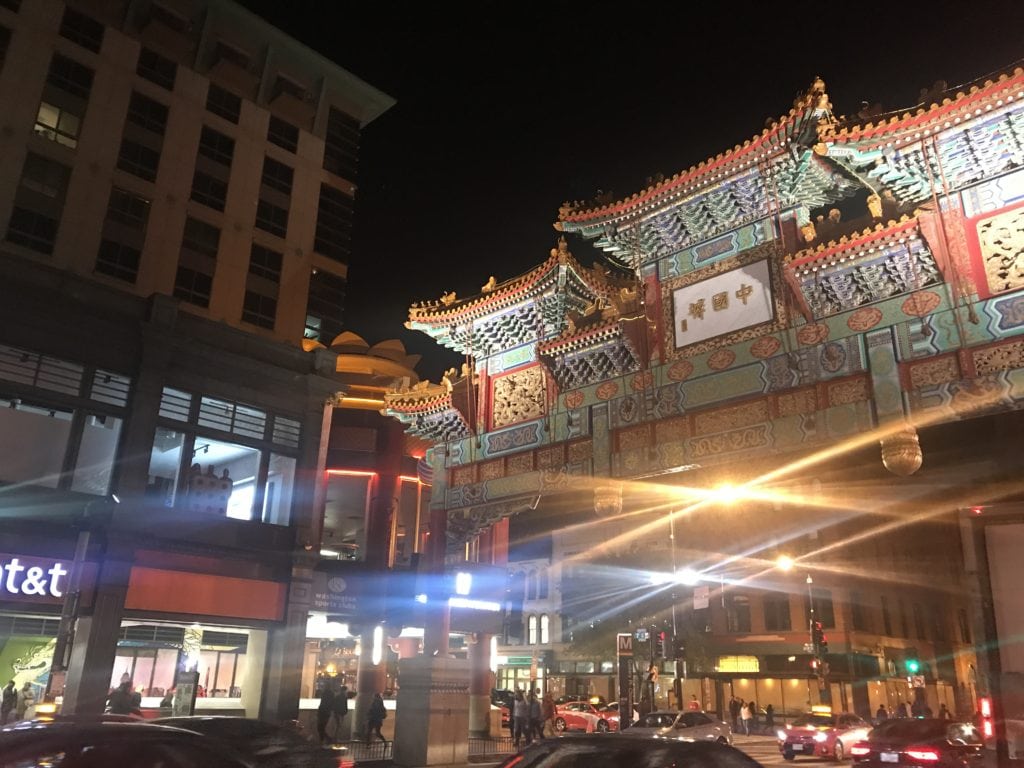 While exploring the National Mall, we came across a myriad of food trucks. So many choices, so little time! At the encouragement of fellow patrons waiting in the cold, we opted for the authentic Indian food truck and savored chicken tikka masala and samosas. Spoiler alert: It was awesome! Ask for extra napkins. 🙂 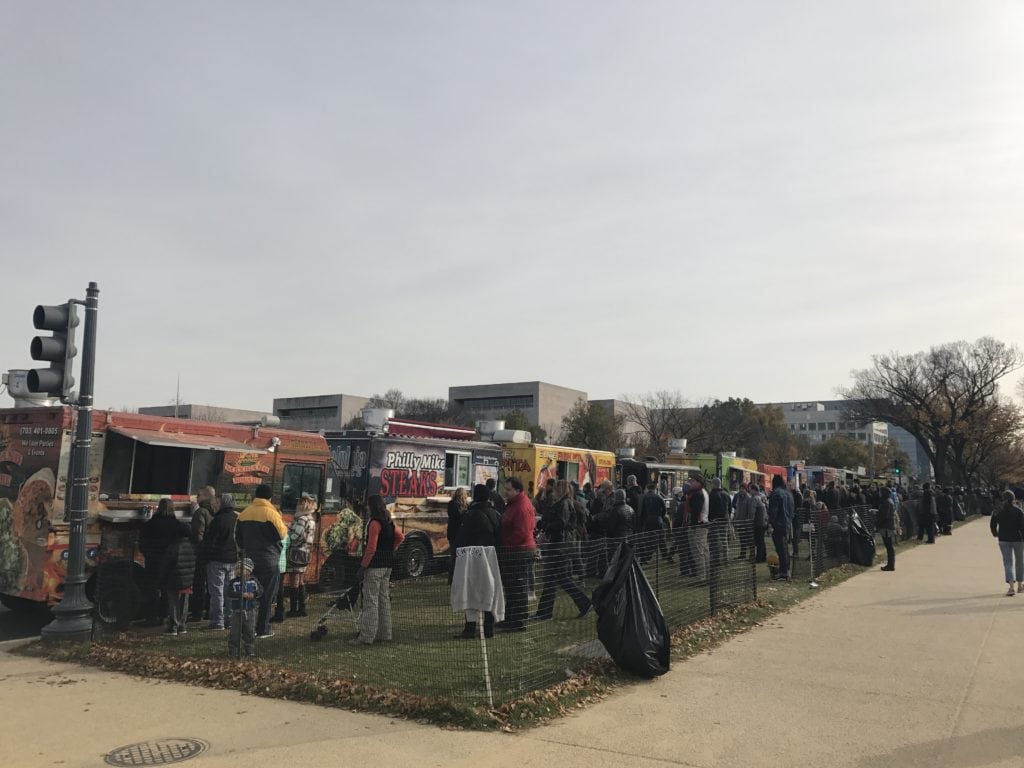 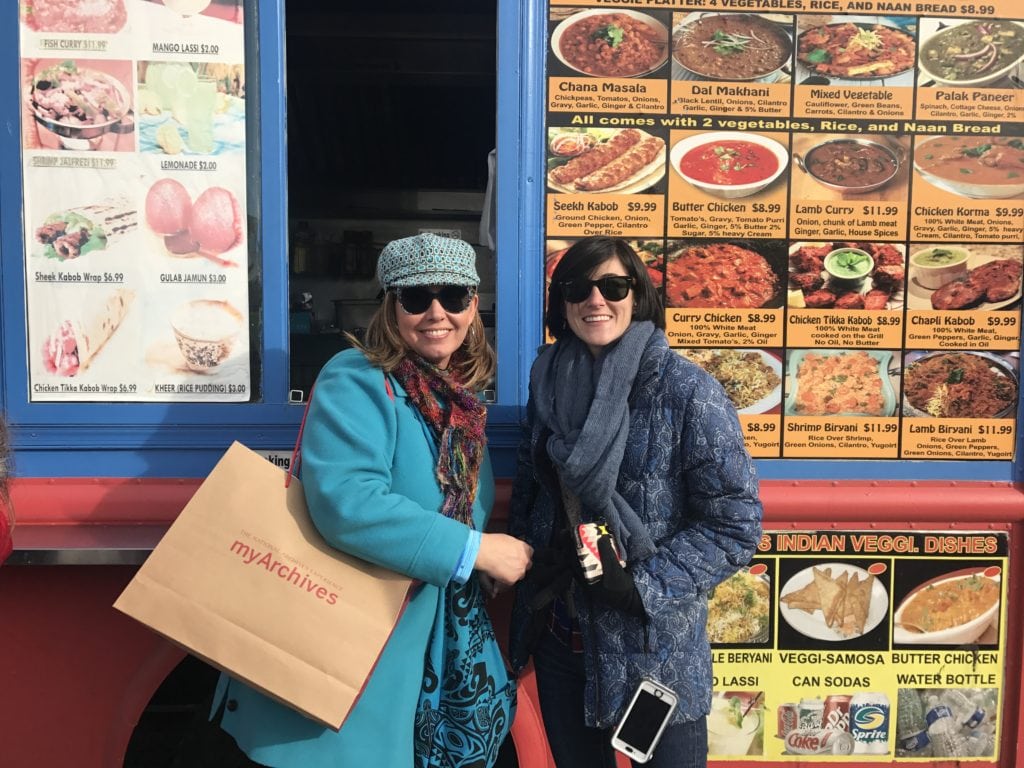 Have you spent a day in DC? Do you have any tips to share?

This post was written by Melissa Edgett, an awesome regular contributor to our Word Traveling team.