It’s always fun to take vacations and see new places and to compare the differences from home. Having grown up in Ohio, I always remember my first trip to Florida, seeing my first palm tree! In addition to seeing different sights on the ground, you can also see differences in the sky. Though everyone in the world sees the same Sun, Moon and stars, you get a different perspective of the sky from different locations on the Earth’s surface. When travelling on a vacation, it can be lots of fun to notice these changes, but you first have to know what you’re looking for!  Let’s talk about taking astronomy on vacation!

For one thing, the stars directly overhead change their positions as you move north and south. Stars that are closer to the North Star appear higher in the sky as you travel north. Similarly, these northerly stars appear lower in the sky as you move south, and the southerly stars appear higher. This is because we are travelling over the curved surface of the Earth, and the stars directly overhead change depending on our location on the globe. In fact, it is because of these changes that we know the Earth is round in the first place!

It really helps to know some constellations, and the more you know, the more you will appreciate. But everybody knows the Big Dipper, right? If not, make sure to at least learn that one! The two outer stars of the “bowl” of the Dipper point directly at the North Star, Polaris. In this way, you can always find north, and from there, you can determine all the other points of the compass. This secret has been known for centuries by navigators on land and sea. Even in our modern world of GPS, we can still find direction using these natural signs that the LORD placed in the sky for our benefit.

Here’s another secret… as you move north and south, you can notice changes in the height above the horizon of Polaris and the Big Dipper! In northerly latitudes, like the snowy lands way up north in the USA, the North Star and Big Dipper are very high in the sky. However, way down south, in Florida, the Gulf Coast, and southern California, Polaris and the Dipper lie very low in the sky, barely grazing the treetops! 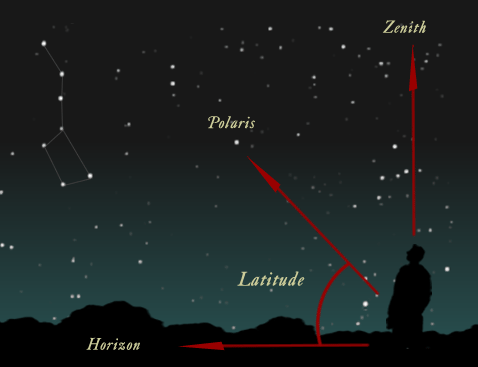 Mathematically speaking, the height of Polaris above the horizon corresponds to the same angle as the latitude of that location. In fact, this is one of the ways that latitude has historically been determined. Imagine that the horizon is at zero degrees, and the zenith, the point directly overhead, is at 90 degrees, so that two lines, one pointed vertically at the zenith and the other horizontally at the horizon, would be square, making a right angle. Any angle that can be measured between the horizon and the zenith can be expressed as an angle between zero and 90 degrees. (Come on, homeschoolers, math is not that hard to understand!)

So anyway, along the latitude of 40 degrees north lie the cities of Chicago, New York and San Francisco, and the North Star would appear about 40 degrees above the horizon, nearly half-way to the zenith. However, Atlanta, Dallas and Los Angeles lie near the latitude of 33 degrees, so the North Star only appears about 1/3 of the distance from the horizon to the zenith. This difference is quite noticeable, especially if you have spent some time looking at these stars from home. 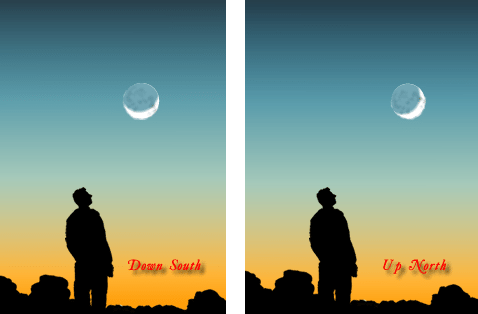 Other differences in the sky are very noticeable when travelling, for the same reasons as the North Star. Sunsets are very long up north, especially in the summertime. And northern visitors to the attractions in Orlando might be surprised to notice how quickly night falls compared to home. Also, the orientation of the crescent Moon can appear different depending on one’s position on the curved face of the Earth. The “horns” of the Moon appear more “horizontal” as seen from down south, and more “vertical” from up north.

If all that is not enough, you wouldn’t believe all the big differences you can see when travelling to the southern hemisphere, in Australia and New Zealand, where everything is reversed! But that’s a whole ‘nother story! So try to learn some constellations before you take your next family vacation. It’ll add a new dimension to your travelling experience, and will give you something new to see up overhead, in addition to all the new things to see on the ground. 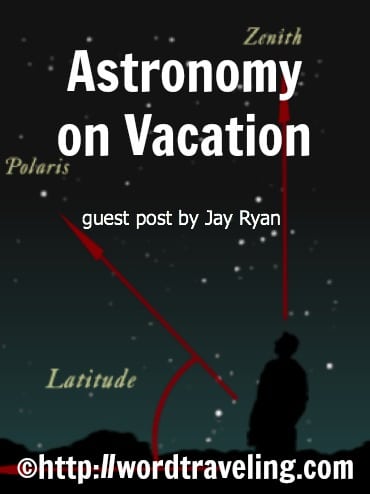 Jay Ryan is a homeschooling father of five, and the author of the Classical Astronomy Update, a newsletter especially created for Christian homeschoolers. Jay’s homeschool curriculum Signs & Seasons is a useful tool for learning the sky, to help your family prepare to watch the sky on your next vacation! Check out his website at www.ClassicalAstronomy.com.