“To be bored in this world is to be boring in this world.” That quote stuck with me since the moment I previewed the awesome nature documentary film, THE RIOT AND THE DANCE.

We had the privilege to get a sneak-peek to review the Riot and the Dance on our living room television, but experiencing this masterpiece the big screen with our homeschool community was larger than life.

As a homeschool mom, I thought you’d be interested in some of the students’ reactions to the film, so I asked a few to share their opinions.

“I enjoyed the movie! I’m looking forward to Part 2. Seeing biology through a biblical perspective was interesting. I watch a lot of documentaries about life and this is the first one I’ve seen where they glorify The Creator and not the created. I loved the poisonous snakes, cute harbor seals and the visit to elusive Sri Lanka.” -Micah Blalock, age 14

“Riot & The Dance is a God-inspired documentary that vividly displays God’s beauty through His magnificent creation. Narrated by Dr. Gordon Wilson, he communicates his great passion to share God’s Word through creation. The eye-catching scenes of this documentary and the enlightening words of Dr. Gordon Wilson definitely unveil a new perspective of God’s amazing creation. I loved seeing all the colorful lizards, and all the different scenery. “      -Shalom Adonai Clark, age 17

“The documentary, Riot And The Dance Part 1, is a spectacular display of the splendors of God revealed through the animal kingdom. The detail was beyond amazing! Riot And The Dance presents conclusive evidence that this magnificent creation could not have come from a random combination of non-living substances, but from a loving and purposeful Creator. My favorite part was the scene with the harbor and elephant seals, It was quite comedic!” – Mishael Clark, age 14

“The Riot and the Dance was a very informative nature documentary on God’s great Earth in motion. The film was thoroughly informative and I wholeheartedly recommend it to anyone. The production was very high quality and I learned a lot about the inner workings of creation. My personal favorite part was the ending – the king cobra popping the water balloons!” -Makani Reyneri, age 14 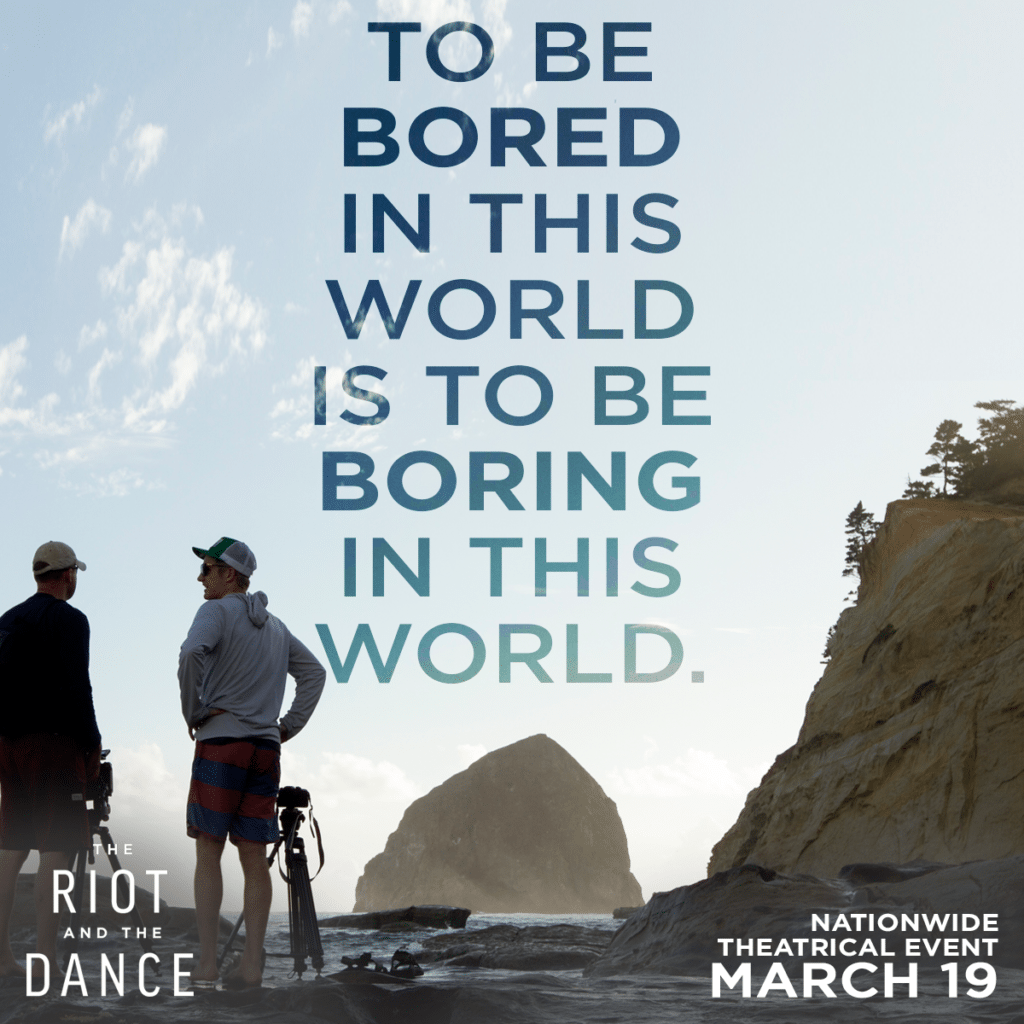 As a woman who firmly believes in creation, I am more excited than ever about the timing of the release of the nature documentary The Riot and the Dance. Dr. Gordon Wilson, biologist, author, and star of the film, was once told “he would never succeed if he kept blabbing about all that silly Creator-creature nonsense.”

Riot and the Dance Review

Join me at the movies for an encore showing!  Just in time for Earth Day, April 19, this Fathom event will once again showcase the glorious uproar of creation with THE RIOT AND THE DANCE.

This boisterous new nature documentary features acclaimed creation-centered biologist, Dr. Gordon Wilson. Follow along as he traverses our planet, basking in God’s masterpieces. Whether he’s catching wildlife in his own backyard or in the jungles of Sri Lanka, Dr. Wilson celebrates God’s creatures in all shapes, sizes, and species.  (Yeah, he was bitten, but thankfully, not by the cobra.)

More information on the RIOT AND THE DANCE WEBSITE.

Details About Attending the Riot and the Dance

See the film in theaters one night only, Monday, April 19 in more than 800 select movie theaters through Fathom’s Digital Broadcast Network (DBN). Audiences will also experience a conversation immediately after the film, featuring special appearances from Dr. Ken Ham, Eric Metaxas, Propaganda and other noted guests.  The Riot and the Dance will be shown in each market at 7:00pm local time, and tickets available for purchase online at www.FathomEvents.com or directly from participating theater box offices.

After the show, grab your free discussion guides.

Dr. Gordon Wilson is a Senior Fellow of Natural History at New Saint Andrews College and is a regular contributor at Answers in Genesis. He has published his research, field notes and abstracts in Southeastern Naturalist, Herpetological Review, Catesbeiana, and the Virginia Journal of Science.  Dr. Wilson and his wife Meredith have 4 children and a growing collection of grandchildren.  When he’s not teaching, you will find him tromping around the Pacific Northwest with his nieces and nephews, looking for snakes and lizard

Show-stopping footage and powerful narration will open your eyes to the extraordinary glory found all over the animal kingdom. From leopards and langurs to vipers and hummingbirds, THE RIOT AND THE DANCE is a cinematic celebration for viewers of all ages. Think Disney’s EARTH series for lovers of our Creator.

About the Writer/ Producer

Writer/ producer N.D. Wilson is the husband of one, the father of five, and the best-selling author of eleven novels, with one more forthcoming. His nonfiction book Death by Living won top honors in Christianity Today’s 2014 Book Awards in the spirituality category. He and his work have been featured everywhere from the Atlantic and NPR to the Today Show and Nat Geo. He received his B.A. from New Saint Andrews College in 1999 and an M.A. from St. John’s in Annapolis, MD. He is also an independent filmmaker and screenwriter, most recently writing and directing the YA drama, The River Thief which released in 2016, and this groundbreaking nature documentary, The Riot and the Dance, with Part 1: Earth releasing on March 19.

Yes, this is part one, with more to release. And that’s exciting news for faith-filled film lovers everywhere!